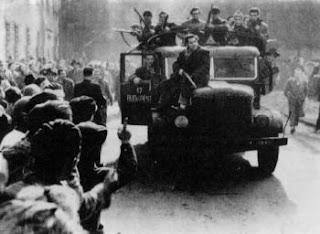 As The Russian Troops were gunning down our freedom fighters, the Hungarian people pleaded, through Radio Free Europe, for the outside world to please come help us: Soviet Troops are slaughtering our people. There was no reply from the West. Some of the countries bordering Hungary wanted to help but the Western powers did not allow it. They were afraid to take their concentration off the Suez Canal Crisis which was happening coincidentally.
The suffering of the Hungarian People and their deaths were totally ignored by the Western Powers. After exchanging communications with some Russian Troops we found out that some of these troops thought they were at the Suez Canal fighting the West. In response, many of them turned against there own and joined forces with the Brave Hungarian Freedom fighters whom they had liberated from the Nazi’s at the end of World War II.
There were times when one was able to see the shattered, broken, shot up streets of Budapest and to witness Hungarian freedom fighters with Hungarian flags in their hands riding on top of these Soviet Tanks shouting slogans of freedom. Constantly there was enemy fire coming from the AVO who were hidden in buildings all over Budapest. They killed many of these heroes. As for the enemy Soviet Troops, most of the time the people fought them with their bare hands and homemade Molotov Cocktails.
This event changed the world, and for which so many Freedom loving Hungarians sacrificed their lives. But it was not in vain. We realize this today.  My immediate family felt that they had to escape this hell which held no future for anyone. My Father and Mother took me and my sister to the border by train while it was still possible to do so. For about a 20 kilometer stretch we had to sneak through the woods in the night in cold winter snows. Occasionally we stopped to rest and tried to catch some warmth from haystacks in the farmlands. We had to keep completely quiet, and for young, crying, cold children this was very difficult. My Uncle and Aunt and their two younger children came with us. I will never forget that when we looked up at the dark night skies there were red fireworks of bullets above our heads. We were completely surrounded by danger. In a flash, we all could have been killed.  I believe I could probably write a book about that 20 kilometer journey. There were so many incidents, but to make a long story short, with a lot of difficulties we made it and we got to the Austrian border and crossed it. This took place just in time because they were putting landmines into the ground all over the place. Later on, we heard many stories of other families being blown to bits by this these mines. From the border, we were taken to Vienna where we stayed for about three weeks. While there we tried to obtain visa’s to go to the US without any success.
During our stay in Vienna, we were told that there were some busloads leaving to go across the Alps to Italy. Our two families decided to try to get on the buses. It was the smartest decision my family ever made.
On the dawn of a beautiful sunny morning we arrived in Rome. After what all our families had been through one can imagine what effect it had on us and on me in particular. As a child of eight it simply brought color into my life .The two and a half years my family and I spent in Rome were the most amazing part of my youth.  The 1956 Hungarian Revolution brought this about and changed my world and everyone’s world. If the Hungarian Revolution had not taken place, our history books would be different and we possible would not be here today. The balance of power would be spread a different way..

Date Added: 2-4-2017
Then 8 now 68 years old, the time has flown by like a flash of light.  We have arrived here in the US at the completion of a most controversial election with a heavy topic involving refugees as I and my family was and wetted as when we arrived in the US back at the end of 1959 on a boat from beautiful Rome Italy. This country that my family and I is a citizen of went through many changes. Till about 9-11-2001 life was somewhat normal. Thinking back to 1989 when the Berlin Wall fell we are about to embark an era of another wall being built to keep good and some bad people out like myself who back at that time had taken more then 3 years to be able to get into the US becoming American citizens. I at this age tend to lean in the middle about all that is going on. I just hope that the world as dangerous as it is right now can avoid from coming to an end so that freedom loving good people can continue living and enjoying all the God-given things that is good about humanities existence.
Now to continue, when my immediate family arrived in the US we had joined my then uncle Paul Apatini in New Orleans and lived there for about a year. (Check www.apatini.com about the family) Then, my Father, Apatini Gyula decided to take us and we moved up to the northeast to NYC. I have been living here ever since. Between 8 and 68, my life was somewhat stable and had its ups and downs, which I won't talk about much in this writing. As for how it's going from here on, will depend on the actions of some significant individuals who recently came to power here in the US it seems. They have an incredible effect on what is to come here and all around the world because it seems these new leaders of the United States are not pure bread politicians and they need to be careful how they try to lead other politicians from countries all around the world. For now, I am putting all you reading this on hold. Lets all hope and pray for the better that everything going on will work out, and the present state of the globe is preserved and kept alive and fair to all the different races, religions, and cultures. I am hoping that we as people can all live in peace and enjoy each other, and be kept in check around the world through the wonders of today's technology of the Internet and through the powers of today's Social Media.